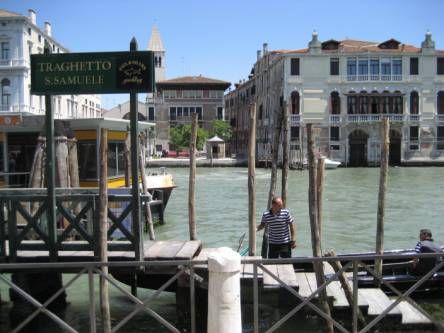 Venice is an island made up of a network of over 100 smaller ‘mini-islands’ with narrow canals and a few wider canals lying in between, all joined together by 400+ small, picturesque bridges and 4 larger bridges which span the Grand Canal. So as you’d expect, moving around the city inevitably involves transport on water and / or getting about on foot!

The main methods are –

Run by the ACTV, these are Venice’s water buses which operate around the island of Venice and along the main wider canals including the Grand Canal, the Cannaregio Canal and the wide and open Giudecca Canal along the Zattere waterfront in Dorsoduro.

A number of vaporetto travel cards and ticket options are available. Note, however, that the vaporetto system does not operate between Marco Polo Airport and Venice or between Treviso (Canova) Airport (which is inland) and Venice.

Despite being a relatively expensive option, taking a water taxi on your arrival or departure is THE most convenient way to travel due to their ability to deliver you and your luggage as close to your apartment as possible. Great fun, glamorous and very James Bond!

In past times it was common for the grand families of Venice to have their own ’house’ gondolas and gondoliers operating out of their family palazzi (think of heiress Peggy Guggenheim taking an afternoon jaunt with her personal gondolier languidly steering at the stern!) It is thought that there were eight to ten thousand gondolas in Venice during the 17th and 18th century but today there are just over four hundred in active service, mainly for the enjoyment of visitors.

These days, a ride on this most quintessential icon of Venice is to many a ‘must-do’ and a popular choice of those wishing to capture the tranquil atmosphere of a bygone age and with those seeking an ‘up-close and personal’ waterside glimpse of Venice’s ancient architecture.

Painted glossy jet black and featuring the characteristic 6 pronged iron prow or ‘ferro’ (each prong representing a separate district or ‘sestiere’ of Venice and topped with a gentle curve thought to represent a Doge’s cap), a trip by gondola can be taken from various gondola stands from where you can enjoy a memorable glide along secret hidden waterways, broader busier canals or a little bit of both.

Should you decide to take a gondola ride when out and about then remember that it’s always worth agreeing the price of a ride, the planned route and the duration of the trip with the gondolier before starting off.

The Gondola Ferry (a number of these can be found at certain points along the Grand Canal (usually indicated on a good map) in which two gondoliers row passengers from one side to the other. It’s traditional to stand up while you make the crossing but you’re allowed to sit down instead, if you so wish! It is customary to pay the Gondolier €2 euros (or 70 cents for residents or if you have a Venezia Unica City Pass for Frequent Users) per person per crossing as you board, preferably with the correct change.

What to do in Venice

The best Apartments for a Summer Holiday in Venice

viewsonvenice on Where can I buy food during my stay?

Glenda on Where can I buy food during my stay?